I must say, I am looking forward to this documentary.  I have always been intrigued by the American religious direction, especially the American flavor of Christianity.  So, beginning October 11, 2010, PBS’ American Experience will bring a documentary called “God in America.”  This will take us through every era of American history and look at the role religion has played.  Here’s an excerpt describing this series:

God in America examines the potent and complex interaction between religion and democracy, the origins of the American concept of religious liberty, and the controversial evolution of that ideal in the nation’s courts and political arena. The series considers the role religious ideas and institutions have played in social reform movements from abolition to civil rights, examining the impact of religious faith on conflicts from the American Revolution to the Cold War, and how guarantees of religious freedom created a competitive American religious marketplace. It also explores the intersection of political struggle and spiritual experience in the lives of key American historical figures including Franciscan Friars and the Pueblo leader Po’pay, Puritan leader John Winthrop and dissident Anne Hutchinson, Catholic Bishop John Hughes, abolitionist Frederick Douglass, Presidents Thomas Jefferson and Abraham Lincoln, reform Rabbi Isaac Meyer Wise, Scopes trial combatants William Jennings Bryan and Clarence Darrow, evangelist Billy Graham, civil rights leader Martin Luther King, Jr., and the Moral Majority’s Jerry Falwell.

"The American story cannot be fully understood without understanding the country’s religious history," says series executive producer Michael Sullivan. "By examining that history, God in America will offer viewers a fresh, revealing and challenging portrait of the country."

Anyone else looking forward to this?

Everywhere He Went, Lincoln Carried a Book With Him 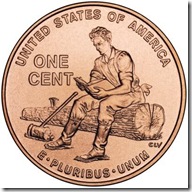 “Everywhere he went, Lincoln carried a book with him.  He thumbed through page after page while his horse rested at the end of a long row of planting.  Whenever he could escape work, he would like with his head against a tree and read.  Though he acquired only a handful of volumes, they were seminal works of the English language.  Reading the Bible and Shakespeare over and over implanted rhythms and poetry that would come to fruition in those works of his maturity that made Abraham Lincoln our only poet-president.  With remarkable energy and tenacity he quarried the thoughts and ideas that he wanted to remember.  ‘When he came across a passage that Struck him, ‘ his stepmother recalled, ‘he would write it down on boards if he had no paper,’ and ‘when the board would get too black he would shave it off with a drawing knife and go on again.’  Then once he obtained paper, he would rewrite it and keep it in a scrapbook so that it could be memorized.  Word thus became precious to him, never, as with Seward, to be lightly or indiscriminately used.”

James I. Robertson, Jr, history professor at Virginia Tech in Blacksburg, VA, has an interesting lecture (yes, it’s an interesting history lecture) on how the Civil War still impacts our lives in ways that we often take for granted.  Originally aired on the Research Channel, this lasts almost 26 minutes, but it’s well worth your time.  Enjoy!